The next Fairview Studios pottery sale will be on Sunday, November 26th from 10 - 2pm this year. Also note that we have had to change locations again (sorry about that). We made this decision after our costs for hall rentals almost doubled and in order to keep our pots affordable, we will now be located at the Kingsland Community Hall. 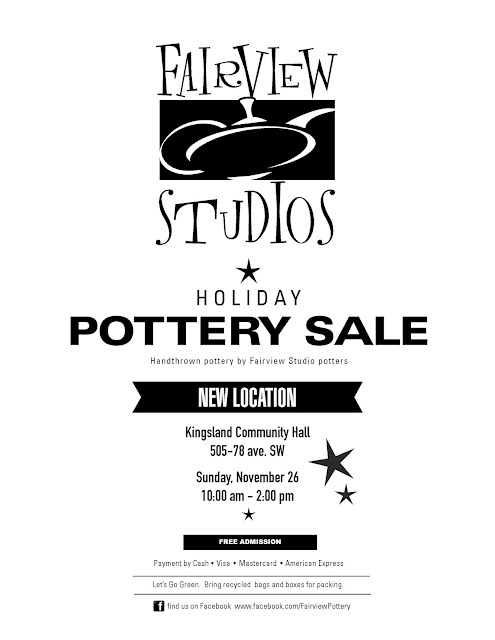 Up Next: Art Horizons Show 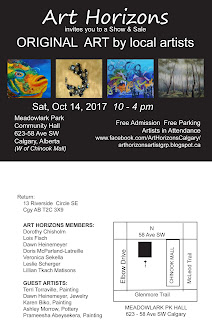 If you are in Calgary on Saturday, October 14th, you should consider coming to this show.
Posted by Unknown at 2:20 PM No comments:

Soda fired in the Kootenays

Wow, Almost a whole year has slipped by since I posted anything. So, not to bore you with the reasons why I have been so remiss in keeping this updated, I will instead show off a few pots that came out of a very special firing that I took part in at the beginning of September. The Alberta Potters Association organized a pottery retreat to fire Robin Dupont's train kiln, but Mother Nature had other ideas. For most of the summer, it appeared as though British Columbia was all on fire and as bad luck would have it, Robin lives smack dab in the middle of the Kootenays where a lot of the fires were located. That didn't stop us though. Plans were changed, and we fired his soda kiln twice instead. I had made a very large quantity of pots in anticipation of the wood firing (over 6 cubic feet of work), but in the end, I probably got 1/3rd of that volume fired. Still, not a bad haul. These are a few of the pots that came out of the first load. To get these very matte blacks and smoky greys, the kiln was reduction cooled to develop more depth of surface etc. I'll have more pictures when I get around to shooting them. 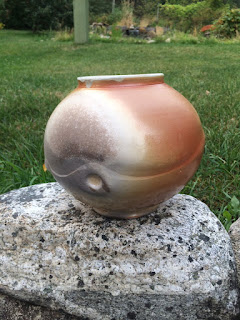 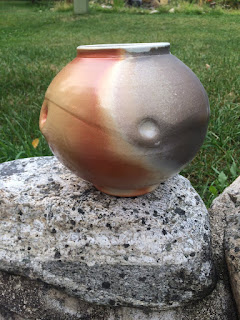 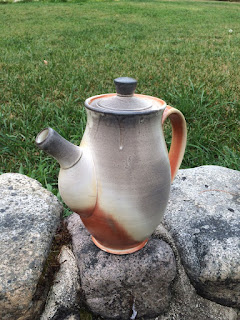 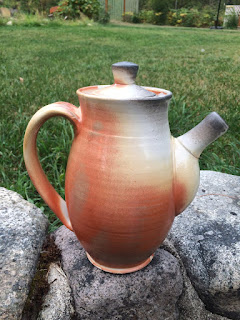 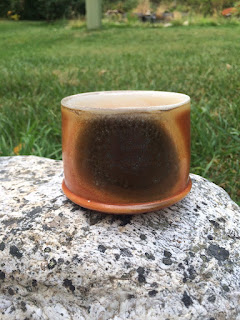 It's totally that time of year again. We all look forward to seeing you at our next studio sale! 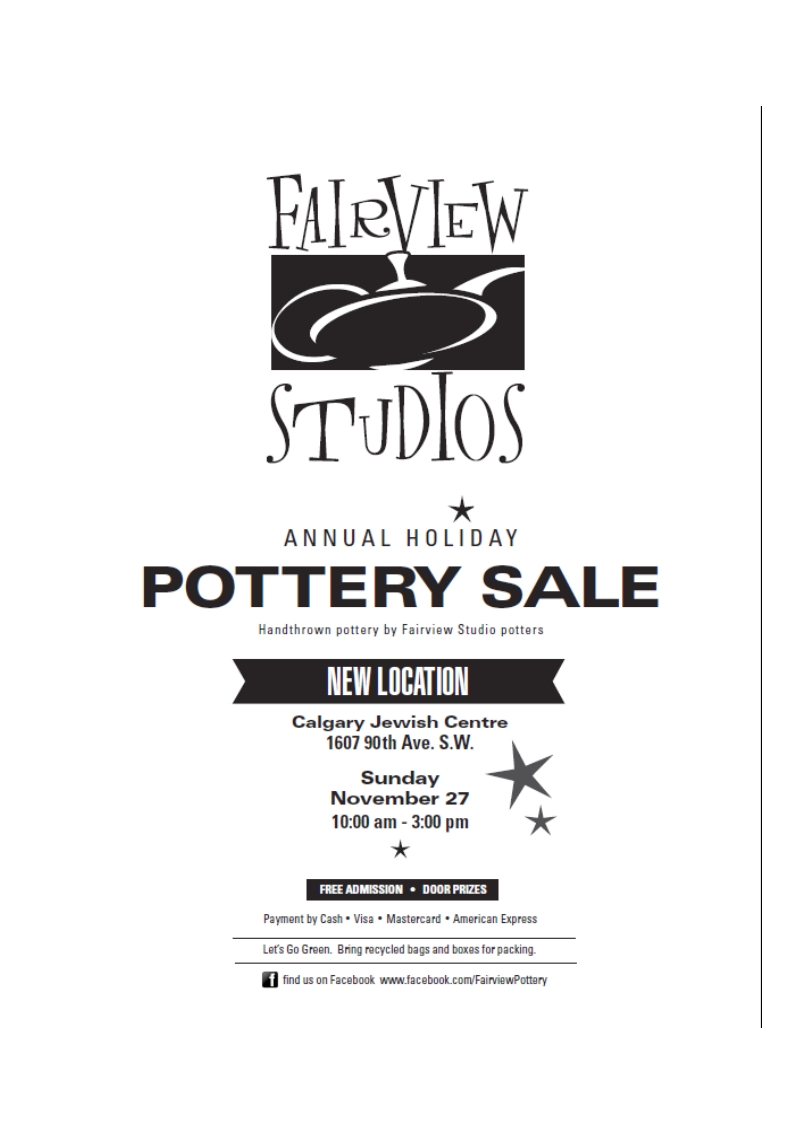 This picture is of one of my favorites from the soda kiln we fired at Medalta and it does not even come close to its amazingness in real life. 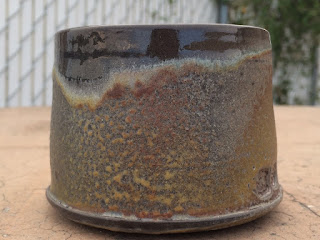 When I got home from Medicine Hat I was exhausted, but the brain has been busy imagining new forms. This pitcher, although definately not a new shape in the world of ceramics, is for me. I have altered pots before but they always looked clumsy to me so I never really moved in that direction. I have given it a try again and I think I like it... 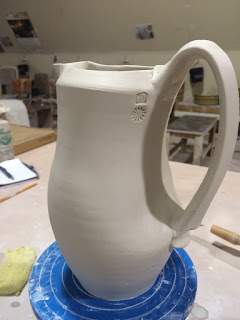 These teapots are also a bit of a change in direction for me, and I have made a few more to potentially go into a couple of teapot shows coming up this fall. 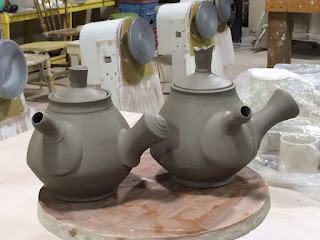 Finally, I threw these large bowls on the weekend. I know the two on the right were thrown from 9lbs of clay, but I think the one on the left was from 6.5 or 7lbs. 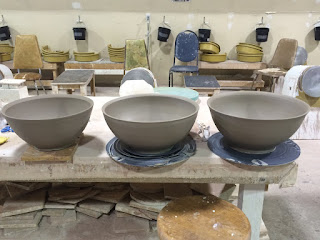 Posted by Unknown at 9:27 AM No comments:

Fun With Sodium Vapor and Other Fiery Tales

I was recently down in Medicine Hat for a 10 day atmospheric firing workshop with Robin Dupont. The goal of the workshop was to fire the salt, the soda and the wood kiln in those 10 days as well as make enough work (on top of what we initially brought with us) to fill them. I left Calgary at about 2:30 pm after picking up one last box of clay. The trip was fairly uneventful, except for the dramatic prairie storm that was on the horizon. I was driving straight towards this huge, towering wall of storm cloud for about an hour and a half before I actually caught up to it, and then the highway veered off to the south and I essentially skirted the storm for most of the way, although I did get a bit wet. This shot is an attempt to capture the electric yellow canola fields against the stormy black backdrop. 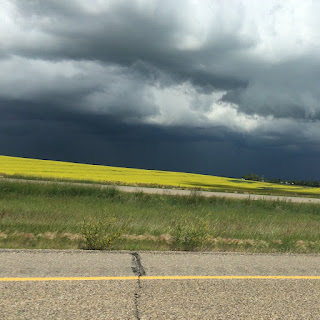 The workshop began on Friday and we were decorating and glazing pots right away to fill the salt kiln. 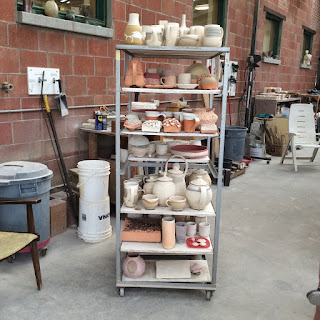 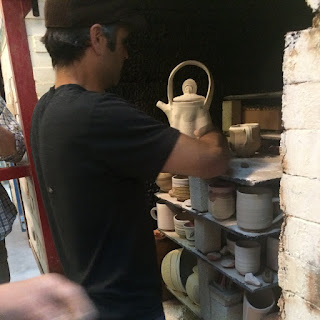 While the salt kiln was firing/cooling, we were all in the studio madly making more pots. That being said, I did take time out to just relax. I was outside the kiln pad when I saw this little guy. Not your regular hare, more a peter cotton tail bunny. It was quite young and there were a whole bunch of them all over the place, hanging out in the tomato patch, under piles of scrap wood, etc. 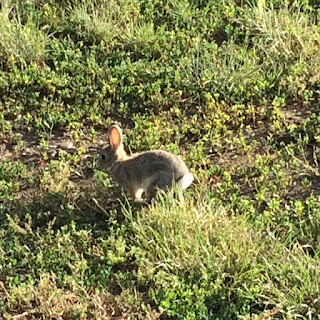 After some debate as to schedule and when to fire, we began loading the wood kiln. We were pushed off schedule a bit because of a massive thunderstorm that knocked out the Blauww gas kiln that was full of our pots getting bisque fired, but a quick reset the next morning to finish the bisque had us back on track pretty quickly. We ended up having so much work that we ended up loading the salt again too. This shot is of the throat arch chamber that is a "secret" chamber in between the firebox and the main chamber. The pots here will get a ton of heat and ash, so fingers crossed they come out ok. 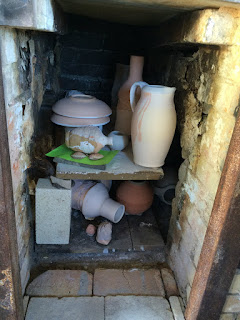 This is the main chamber and the pots here will get less ash deposited on them. 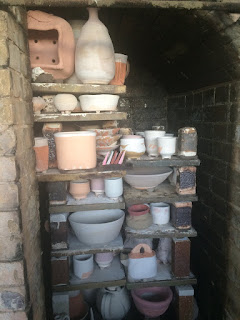 This isn't the actual storm, but it was a precursor to the one that knocked the gas kiln out. 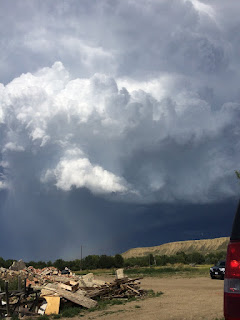 Once the wood kiln was loaded, we fired it up at around 10 pm on Wednesday night. I was on stoking shift from midnight to 6am Thursday morning. This was a fairly easy shift, just keeping the fire going and spreading the coal bed around, making sure not to chuck wood into the pots that were about 2 feet away from the action. 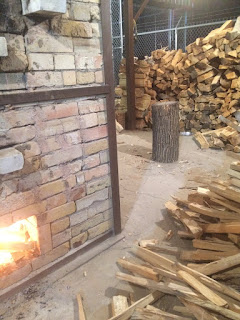 After that shift I went to bed for about 4 hours and came back to the studio to finish glazing pots for the soda and salt kilns and to start the loading process. Somewhere around 10pm it became apparent that there was a problem. We couldn't get anyone to do the midnight to 6am shift on Thursday night/Friday morning, but even though I had really only had 4 hours of sleep in the last 24 hours, I volunteered. That was actually fun. I was on shift with Michelle, a potter from Ft. McMurray. She chopped and split wood and I stoked. We were firing with cotton wood, not the easiest wood to fire with as it is a horrible wood to chop and it burns so fast you are constantly stuffing the firebox full of logs. I did get a really good feel for how that kiln fires. I was even able to tell by the sound it was making as to when temperature would start to climb, when it needed wood, when to fill the firebox etc. The heat was insane, and I lost about a gallon of sweat. When we were nearing our goal temperature, we began spraying in about 2 lbs of soda into the main chamber. 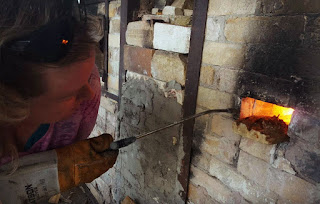 I missed most of that morning and afternoon as I was sleeping, but I came back around 3 to witness the addition of the salt and soda. We were really concerned that the draw rings were not showing much glaze and so in an attempt to get a better read on what was going on, Robin decided to take a little cup off the bag wall that was able to fit through the port. I think we ended up adding another 3 or 4 lbs to the kiln. After we reached temp and we shut it off, Robin then perfomed a very slow cool down at around 1800F by keeping one burner on low to prevent the kiln from dropping in temperature too fast until it got to about 1400F (I'm working from memory here, so I might be off on my temps) 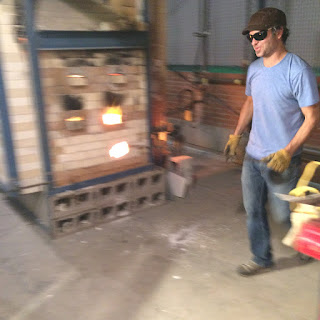 These are a few results from the kilns: Wood fired porcelain flask 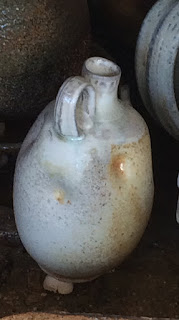 Wood fired stoneware pitcher fired in the secret chamber. It looks really crusty, and it is, but I have cleaned and scrubbed most of the crud off of it. I still need to grind a few chunky rough spots off and smooth the handle, but it should be pretty good. 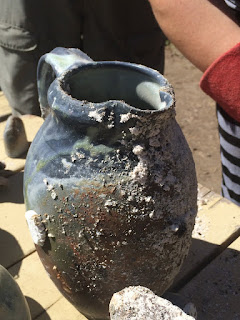 One of my favs. This cup came out of the soda kiln and is a really good example of what the slow cooling at the end achieved. It matted the surface and promoted crystal growth. In the sunlight, this surface is so amazing. There are rainbows of colour and the surface feels soft and silky. I had a few good pots out of the first salt, but only 2 cups made it into the 2nd salt and I guess I did not take any good pics of those pots, so we'll wait until I clean them up and get them ready to take to market. 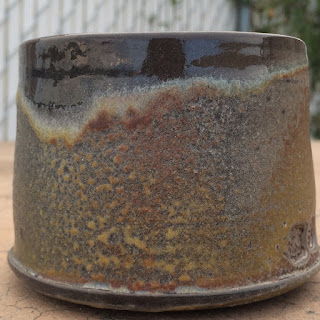 My drive back home: 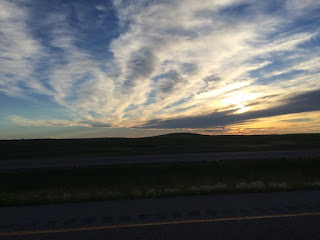 Early Birthday Present To Me

I ordered this a while ago and it arrived at Ceramics Canada yesterday. It is a gas conversion kit that will turn a 10cu.ft electric kiln body into a propane fired kiln with the goal of firing it in either a soda or salt atmosphere. I'm guessing soda will be the end choice as salt pretty much melts soft fire brick, but I might opt to prepare the bricks with a refractory coating like ITC 100 and that should effectively prevent salt eating away the bricks. 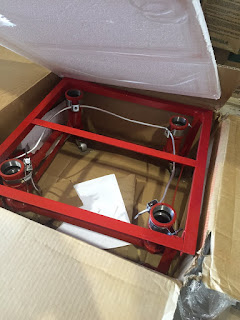